The Odyssey Award, a national distinction calling out superior audiobook production for youth, is just eight years old–and already Live Oak Media has walked away with the crown three times!  That’s truly remarkable, as this award is bestowed by an annually changing collaborative committee with members of both the Association of Library Services for Children (ALSC) and the Young Adult Library Services Association (YALSA), meaning that the the winner meets criteria adjudged by professionals who work with everyone through age 18.

While the Audie Awards are granted by the audiobook industry to its own–through a vetted process of independent judges–the Odyssey Award is handled by librarians and other library staff who work with children and teens, select audiobooks for large and small, public and school collections, and listen specifically for production excellence when selecting the award winner. For a production company where fewer than two dozen titles can be created a year, to walk off with the declaration of “best” so many times certainly says a lot about quality.

And the audiobook industry, especially for youthful listeners, is getting better and deeper all the time. So the competition is not only expanding in number but also in range.

Congratulations, Live Oak Media! You did it again!

PS You can hear a sound clip from this year’s Odyssey Award winner, H.O.R.S.E., here.

The United States Board on Books for Young People (USBBY) released its annual list during the opening of the 2015 Midwinter meeting of the American Library Association. Among the books touted on the new list are several from our own publishers: 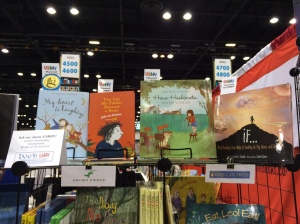 H.O.R.S.E. A Game of Basketball and Imagination

The Odyssey was created to honor the best audiobook produced for children and/or young adults and is co-sponsored by the Association of Library Service to Children (ALSC) and the Young Adult Library Services Association (YALSA). The Odyssey Award announcement was made at the ALA Youth Media Awards press conference this morning during the American Library Association Midwinter Conference in Chicago, along with other significant awards for children’s literature, including the Newbery and Caldecott Medals.

Live Oak Media Producer Arnie Cardillo said “Chris Myers’ H.O.R.S.E. gave Dion, Chris, and everyone else who worked on the audio production the opportunity to let go of the everyday world for awhile and, like the characters in the book, let our imaginations soar. I’m glad that the Odyssey Committee joined in on the fun! It was great being in the studio with Dion and Chris, who perfectly personified the spirit and banter of the two friends. We’ve been honored over the years to work on several recordings with Chris and also with Walter and their editor Regina Griffin, and this feels especially rewarding.”    “Having directed and, along with Chris Myers, narrated H.O.R.S.E it’s a thrill to learn of this prestigious award,” said Dion Graham. “That this follows our previous collaboration, WE ARE AMERICA, written by the great Walter Dean Myers and illustrated by Chris…let’s just say it’s great to be on the H.O.R.S.E together again. It’s particularly gratifying to receive this honor along with my dear friends Arnie and Debra Cardillo of Live Oak Media. For many years they have consistently produced excellent creative work for children (and us others) that dares to think outside of the box. H.O.R.S.E is all that AND a bounce pass to the moon! A great surprise. What an honor.”  Located in Hudson Valley, New York, Live Oak Media is a small, family-owned audio publisher with a 35-year-tradition of producing recordings of classic and award-winning children’s literature.

In addition to this third win of a prize from the committee formed of membership from both the Young Adult Library Services Committee (YALSA) and the Association for Library Service to Children (ALSC)–a prize that is only seven years old–Live Oak Media also earned kudos and recognition  via the ALSC Notable Children’s Recordings List this year. Live Oak Media has three titles on this list:

Betty Bunny Didn’t Do It, written by Michael Kaplan, and performed by Katherine Kellgren

Deep in the Swamp, written by Donna M. Bateman, and performed by Tom Chapin

You are walking down the exhibit aisles at ALA this weekend and your eye is caught by a colorful image. You find yourself with the age-old question asked by eye-candy loving librarians at some point in their conference career. Do I pick up that poster? And, even more important, do I get it home without crushing it beyond reclamation? Here’s a handy guide to help you prepare for that moment(s):

Evaluating Whether It’s Worth It?

Can I Get It from Here to There?

Now that you’ve decided to keep it, you have to be able to get it home. Here are my time-tested techniques on poster preservation:

I’m glad I was able to help. Now that is settled, here are some posters to help you practice your evaluation techniques. If you would like any of these, be sure to visit Publisher Spotlight at ALA Midwinter, Booth #4621.

P.S. We have rubber bands.